We take a look at some of the challenges affecting London retail, what are the core challenges?

London retail, like in many cities, has a had a very challenging 18 months due to the global pandemic. London is often cited as one of the biggest retail cities in the world. With an unrivalled variety of tradezones across the metropolitan area, from high footfall, mid-market consumer high streets, to premium luxury shopping destinations.

Retail is vitally important to London, as of June 2021 approximately 446,000 people were employed in retail and wholesale goods industry within Greater London, with this number representing 7.5% of total employment. In 2020 it is estimated that total UK retail sales were £430 billion, with London delivering approximately 20% of this.

The global pandemic and national lockdowns, cut-off the most important element of physical retail – footfall. This forced the London consumer into a greater reliance on ecommerce to supply their non-essential needs. London retail had been struggling well before the pandemic, with retail vacancies steadily rising year on year and the consumer opting to shop online more frequently, freeing up personal time for other activities.

Why should the consumer shop on the high street? Is Oxford Street still the bustling and exciting retail destination it was 10 or 15 years ago? Have store closures damaged appeal? Is the shopping experience satisfying and exciting? Are retailers giving the consumers enough reasons to shop in store in London flagships and megastores?

Now that retail ‘is back’, consumer confidence is rising (and we’re in the middle of ‘The Golden Quarter’) which retailers are making an impact and attracting their consumer with an exciting and engaging storer experience? Let’s take a look at our choice of the ‘best stores to visit in London’. 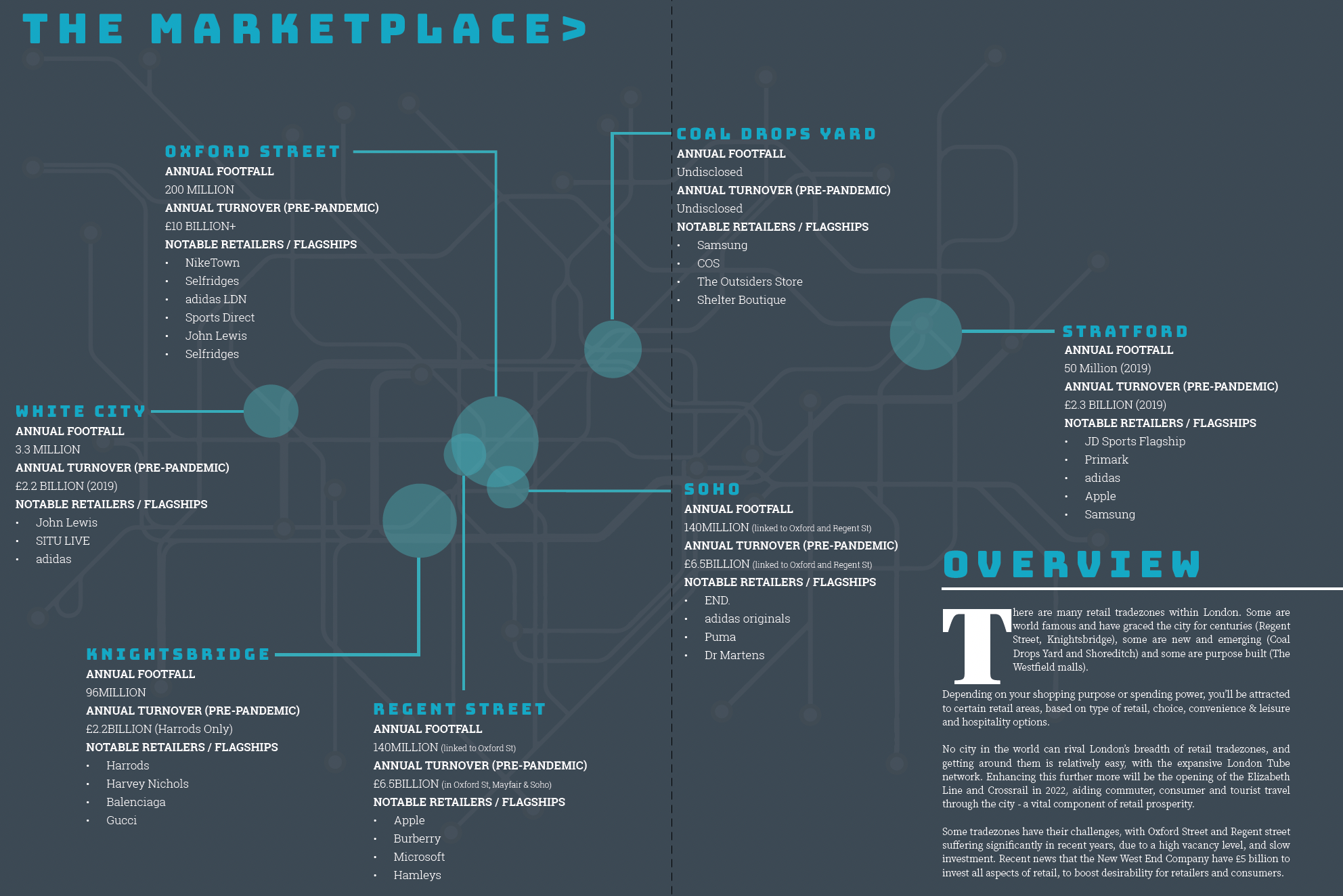 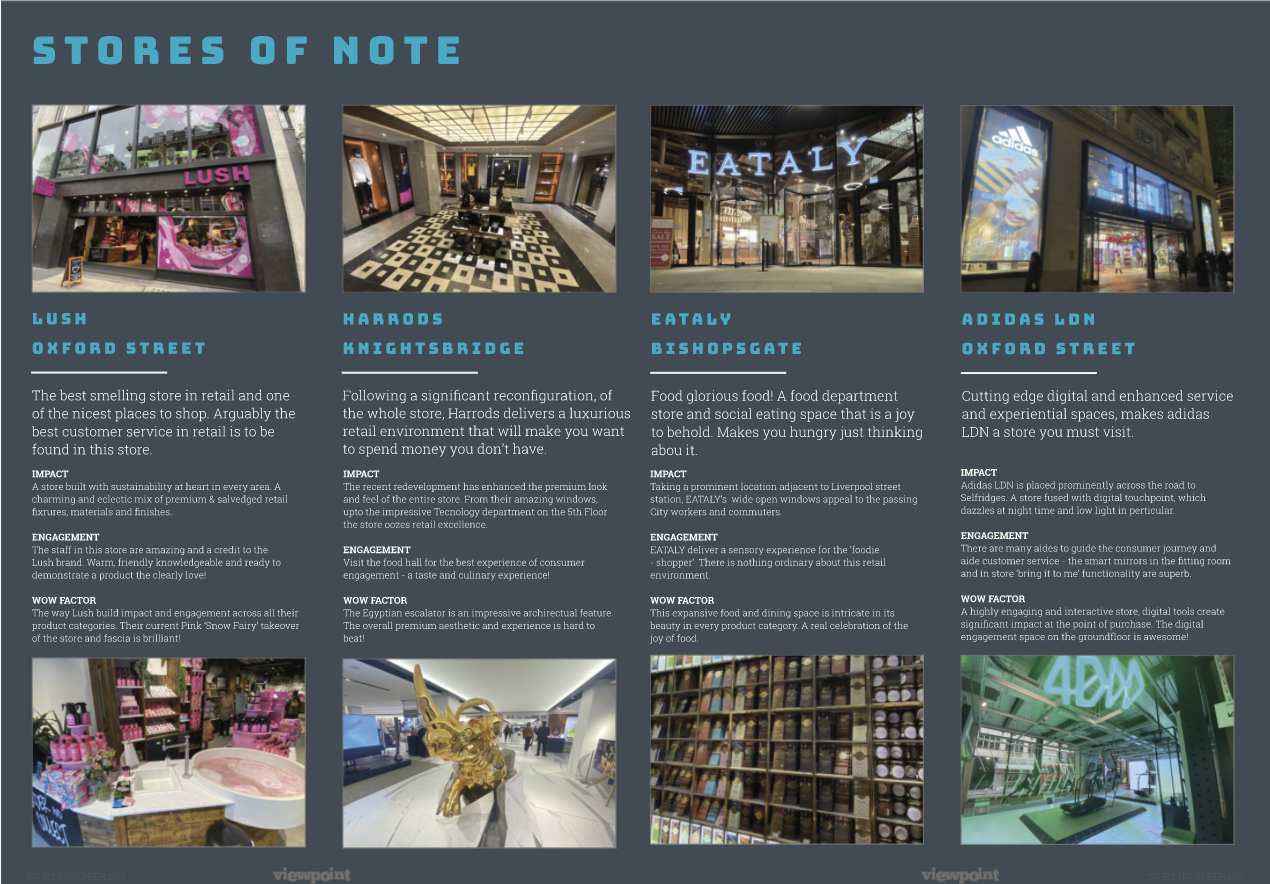 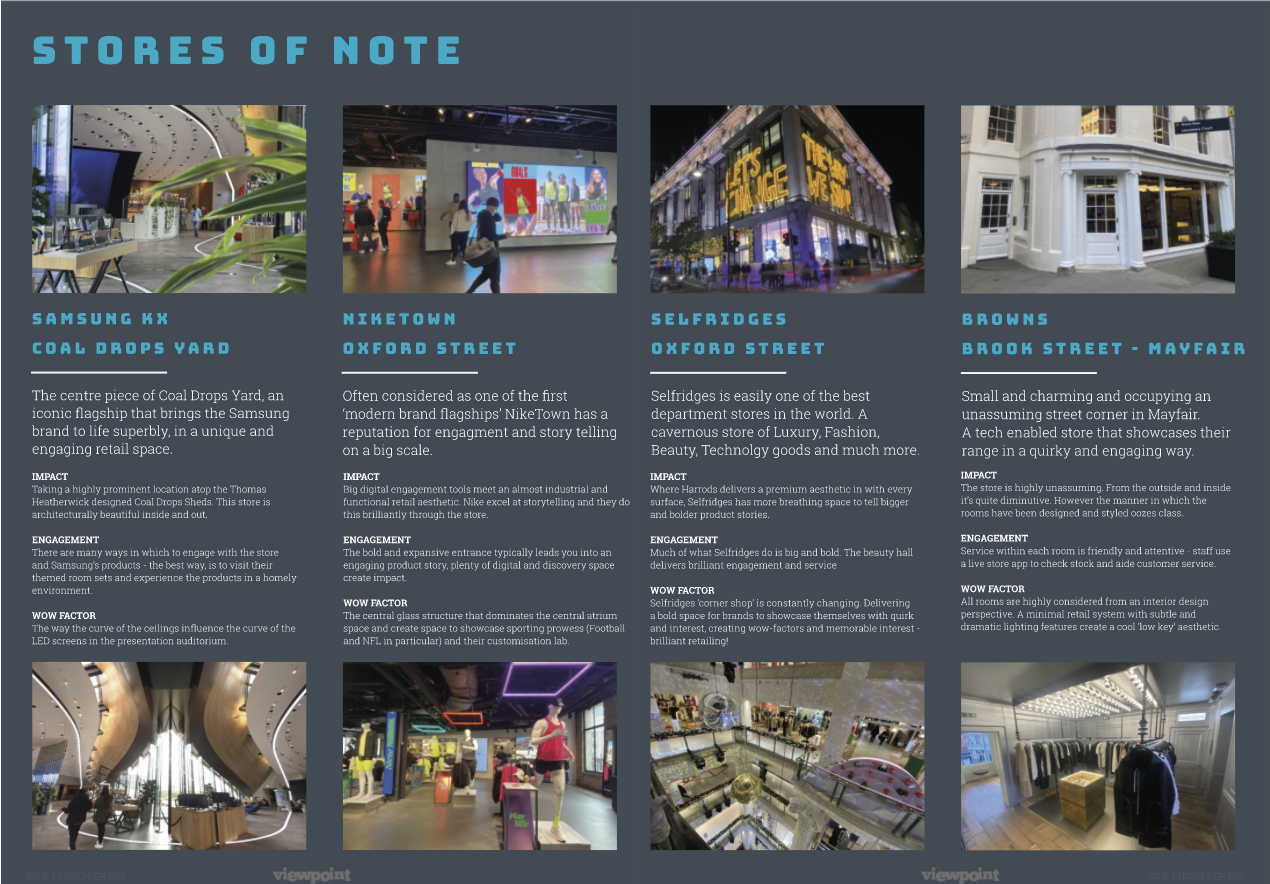 There are many retail tradezones within London. Some are world famous and have graced the city for centuries (Regent Street, Knightsbridge), some are new and emerging (Coal Drops Yard and Shoreditch) and some are purpose built (The Westfield malls).

Depending on your shopping purpose or spending power, you’ll be attracted to certain retail areas, based on type of retail, choice, convenience & leisure and hospitality options.

No city in the world can rival London’s breadth of retail tradezones, and getting around them is relatively easy, with the expansive London Tube network. Enhancing this further more will be the opening of the Elizabeth Line and Crossrail in 2022, aiding commuter, consumer and tourist travel through the city – a vital component of retail prosperity.

Some tradezones have their challenges, with Oxford Street and Regent street suffering significantly in recent years, due to a high vacancy level, and slow investment. Recent news that the New West End Company have £5 billion to invest all aspects of retail, to boost desirability for retailers and consumers.

TRANSPORT. The opening of Crossrail and the Elizabeth line will increase the flow and throughput of passengers into key city tradezones. London has always been a connected city, recent significant investment in transport infrastructure helps consumers travel from tradezone to tradezone with ease – increasing daily spending potential.

PREMIUM RETAIL. London is a highly affluent city. Through the city there are many areas that can be classed as Luxury retail destinations: Mayfair; Marelybone; Bond street, Regent Street; Knightsbridge; Kings Road; Sloane Square and many more.

ACTIVE INVESTMENT. Ignoring the expensive white elephant that was the ‘Marble Arch Mound’. There has been plenty of active investment in key retail tradezones, primarily linked to Crossrail and the Tottenham court road development. Widening of pavements along Oxford Street and Regent Street has helped ease pavement congestion and create more of a boulevard feel to the streets.

SPORT & E-GAMING. Sport is vitally important to London retail. With at least 10 teams in the Premier League or Championship within the M25. Add to this the annual NFL matches played at Tottenham stadium and the fervent support and retail ‘boost’ it brings, ensures that sport retail contributes significantly. The growing interest and support in e-gaming will continue to grow in London and contribute to the London retail economy.

MUSIC. Has always been a big part of London culture and consumer motivation. The opening of OUTERNET creates a new focal point for music and culture in the heart of the city and close to the major shopping tradezone of Oxford street. A high impact, large format digital experience, will dazzle visitors. OUTERNET alone will drive significant footfall to the ‘tired end’ of Oxford st as part of the major redevelopment of Tottenham Court Road junction.

VACANCY RATES. You can’t ignore the fact that there is an extremely high amount of vacant retail properties in London. This drastically reduces the appeal of Oxford Street, Regent Street and major malls white city and stratford in particular. Landlords are urgently reviewing how they sell space in their huge vacant units. Split them up into smaller units? Create office, residential or hotel space…

TIME. The modern London consumer has had an opportunity to re-evaluate how they like to shop, because of the global pandemic. Now that retail is open, the consumer (specifically the younger consumer) wont rush back to physical retail for all their shopper needs. Instead they will now balance their time between online and physical retail. The biggest benefit to them? Time. Time back to socialise and relax.

TRADEZONE INVESTMENT. The West and company has secured significant funding to invest in the main shopping areas, has this funding come at the right time, or is it too late? Many retail tradezones accross the city require significant investment to improve desireability of the locale. Should Oxford Street be fully pedestrianised? Often considered, but surely this would support desirability for shopper footfall and anyone wishing to live or work on or near the street.

A continuing issue for landlords. The high street is fast becoming less and less attractive places to shop.

Recent new developments such as Coal Drops Yard, Spitlfields & Broadgate Centre are excellent. Oxford Street, Regent Street are very much in need of the recent investment announced by The West End Company.

London already has 33% ‘green space’ across the city – one of the highest of all the global ‘mega cities’. Would the city benefit from the creation of more green space derived from the removal of problematic and aged retail spaces and developments?

The creation of further public events within key tradezones will help boost footfall and spontaneous purchase intent, in many retail sectors. Which would be relatively low cost.

The opening of OUTERNET will create significant buzz and footfall. By offering entertainment experiences that can only be seen ‘in the flesh’ will create hype and excitement.

2022 is expected to be a boom year for global tourism, as challenges brought on by the global pandemic relax further and consumer confidence grows – The London retail & hospitality economy has the potential to capitalise on this.