WILL HALLOWEEN BE A TREAT FOR RETAILERS?

Last year, following weeks of localised lockdown restrictions, Boris Johnson announced the second full national lockdown on 31st October – Halloween. This news meant that legally, no-one could go ‘trick or treating’. Well, no-one was allowed to knock on doors, or attend parties – families could still dress up and decorate their house and leave sweets out for passing ‘trick or treaters’.

Last year’s restrictions effected total Halloween sales in the UK. In recent years the value of Halloween as a seasonal sales event had been increasing year on year. From £230 Million in 2013 to £310 Million in 2016, that’s an increase of 34%. The following year then saw a big spike in spending, which rose by almost another 29% to £400 million. In 2019, spending rose again and reach £474 million +18% on the previous year.

And then came the pandemic in 2020, damaging the sales growth that Halloween had been building. Will 2021 be the year that sees Halloween break £500 Million in total sales? Halloween is the third most valuable seasonal event after Christmas and Easter, and retailers and suppliers know that this Halloween must be big from a sell through perspective, putting extra scrutiny on the supply chain. Consumers who are already mindful of this have been making their Halloween purchases a lot sooner. The big grocers have created bold seasonal product aisles, supported with brand supplied mid-floor FSDU’s from the big confectionary brands to create excitement and maximise sell through at the point of purchase.

With families deprived of a ‘proper’ Halloween last year will we see them go all out in celebrating the ‘spooky season’? General merchandise and value retailers such as B&M, Wilko and Aldi, know that they must deliver and exceed their sales projections for Halloween, this will ensure that their ‘golden quarter’ stays on track. In many ways, if Halloween falls below expectations, will this raise alarm bells for Christmas trade?

So, The consumer is going to spend big on Halloween this year, with sweets and costumes making up the majority of spend. What about pumpkins? In 2020, apx 25% of Brits said they would buy a pumpkin for Halloween, a total of 17 million pumpkins were sold. The total cost of this in 2020 was £29.7 million. This year, demand is higher, but supply has been challenged, meaning that supply to supermarkets has been affected, but ‘pick your own’ has become prevalent – that’s one way to get around a labour shortage!

What do you do at Halloween? Do you get involved? An amusing statistic from 2017 illustrates the UK consumers attitude to Halloween. 50% said they won’t be opening the door to trick or treaters! Imagine if this year they did open the door and handed out sweets? That would definitely drive sales beyond the £500 Million mark! 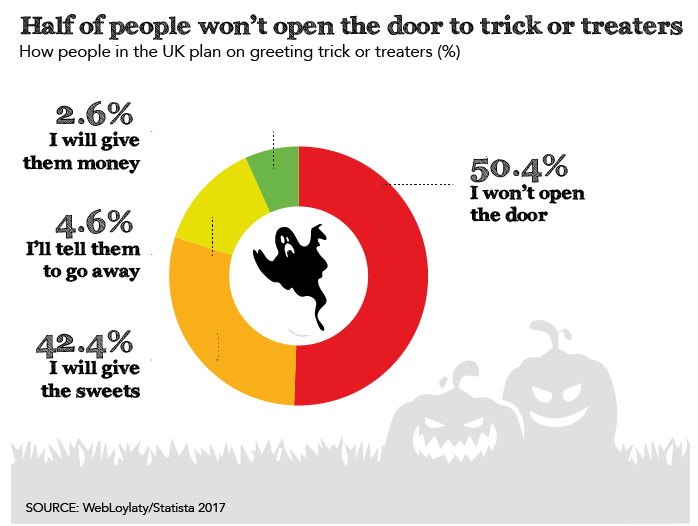